In an effort to maintain demand from affluent consumers and lessen competition despite a global economic slump, Apple has ordered its manufacturing partners to produce at least as many iPhones as in 2021, according to Bloomberg.

Despite dismal predictions for the smartphone market, the company ordered assemblers to produce 90 million iPhones in total. Apple plans to make about 220 million iPhones in total in 2022, which is about the same number as in 2017. Ignoring the fact that IDC analysts estimate that the global smartphone market will shrink by 3.5% in 2022 and by 9% in June alone, it is expected that Apple is convinced of its expertise.

HUAWEI’s disappearance from the relevant market has been very helpful to the success of the business. In addition, some rumours claim that in 2023 Apple plans to “slow down” the cost of new personnel in certain of its divisions. Because people want to buy high-end smartphones, there is a full supply of iPhones, but shipments of Android phones are still going down.

From the time of the launch to the end of the year, Apple kept the iPhone sales figure at 75 million devices till 2021. She increased the goal to 90 million in 2021 in anticipation of increased demand following the pandemic’s recession. During the last fiscal year, iPhone contract assembly businesses had sales and profits that had never been seen before. 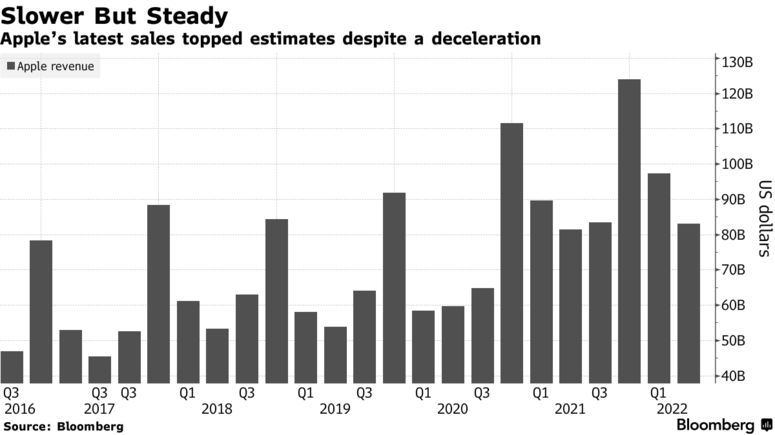 Bloomberg predicts that the percentage rise in iPhone sales will continue in the “single digits” throughout the short to medium term. Accelerating inflation, changes in Europe, and sanitary limitations brought on by COVID-19 outbreaks in China may cause the product refresh cycle to last longer, which might have an effect on sales growth in the fiscal 2022 period.

According to the Bloomberg report, Apple is working hard to get ready for the release of four new iPhone models, which are expected to be better than the models from 2021.

Furthermore, Bloomberg reports that Apple will unveil four new iPhone models in 2020. The iPhone 14 Pro models will have a better front-facing camera, a new rear camera system with a 48-megapixel sensor, a slimmer bezel, a better A16 CPU, and a redesigned notch with only a pill-shaped notch for Face ID and a punch-hole for the camera.