How a Chimpanzee Ruined a Photographer’s Makeshift Studio

National Geographic photographer Joel Sartore recently shared a hilarious story of how a chimpanzee took one look at his makeshift studio and destroyed it in seconds.

The entertaining video was posted to his Facebook feed. Sartore explains that when he was first starting work on his Photo Ark series, he explored different ways he could capture animals in a studio-like setting.

“I decided that using a paper background for great apes would be a good idea. It wasn’t,” he writes.

“I drove from my home in Lincoln (Nebraska) to the Sunset Zoo (Kansas). Their troop of chimpanzees was in their huge outdoor enclosure as my son and I readied an off exhibit space for the photo shoot.

“We’d brought a roll of heavy, white paper, then cut it to fit perfectly, including the floor. Plenty of heavy duct tape held everything in place, and after about an hour, we were all set with the entire room a picture-perfect white. What could possibly go wrong?” 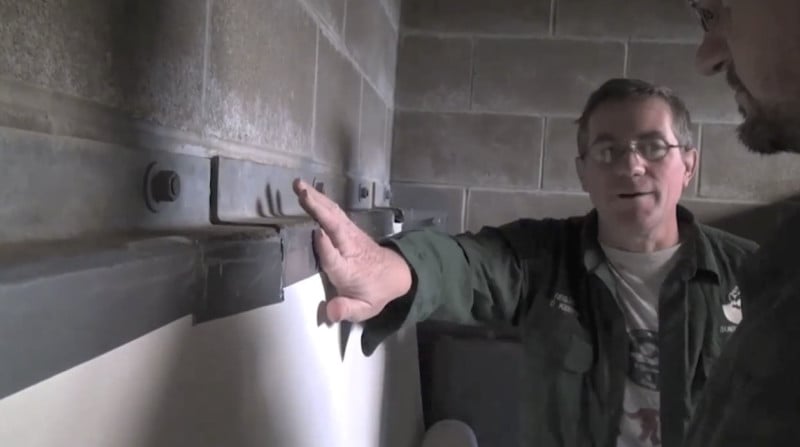 Despite Sartore being fully aware of the power that chimpanzees possess, stating in the video as he duct tapes the paper background: “They are pretty strong. I hear they can rip your arm off and beat you to death with it.” The photographer and his son were soon left disappointed as the chimpanzee made short work of their studio efforts.

“The chimps took one look at the setup from a nearby stall but didn’t go in the room. Instead, one big male stuck one arm in and pulled the entire set down; in one swift grab, he yanked all the paper out through a side door. The entire demolition didn’t even take ten seconds,” Sartore writes.

The resulting timelapse video is pure slapstick as the chimp touches the paper, looks at the camera, and tears away the makeshift studio as if he was picking up a pillow.

“I could hear the chimps vocalizing as they began to tear up the paper into little tiny bits. They had a lot of fun. Me, not so much. We packed up the lights and began the long drive back home, empty-handed.”

“Today we use paint on the walls and floor to do all our great ape portraits. At least that way we know we’ll get our pictures…at least until the chimps learn how to peel paint,” he adds.

The reason for Sartore’s attempt to photograph a chimpanzee in this way is because he was in the early stages of creating the Photo Ark project. He photographs each species on a white or black background eliminating distractions and ensuring the animal is the main focus.

No matter its size, each animal is treated with the same amount of affection and respect. “It’s the eye contact that moves people. It engages their feelings of compassion and a desire to help,” Sartore says.

For more of Sartore’s work visit the Photo Ark website. As well as his website and Facbook page.