A pilot risked melting his drone to capture awesome shots of the recent volcanic eruption in Iceland.

17-year-old Svanur Gabriele flew his drone over the lava to capture stunning footage for Airstock after dozens of earthquakes disturbed a number of volcanos.

The Icelandic team captured spectacular FPV film over Geldingadalir and the Meradalir Volcano on August 3. Founder of Airstock Gardar Olafs tells PetaPixel about the dangers of the shoot.

“The area can be dangerous since there is gas coming from the fissure. If the wind direction changes it is necessary to have a proper gas mask,” explains Olafs.

“There is also a lot of air traffic as well with helicopters and airplanes flying over with scientists and researchers so flying a drone at the eruption site can be risky.”

The Nordic team used a custom-made five-inch freestyle FPV drone with a GoPro Hero10 capturing the action. Their drone is capable to reach speeds of 100 miles per hour.

“Svanur Gabriele is the pilot and is specializing in FPV acrobat flying, he’s 17 years old and based in Iceland, he captures footage for us here at Airstock,” explains Olafs. 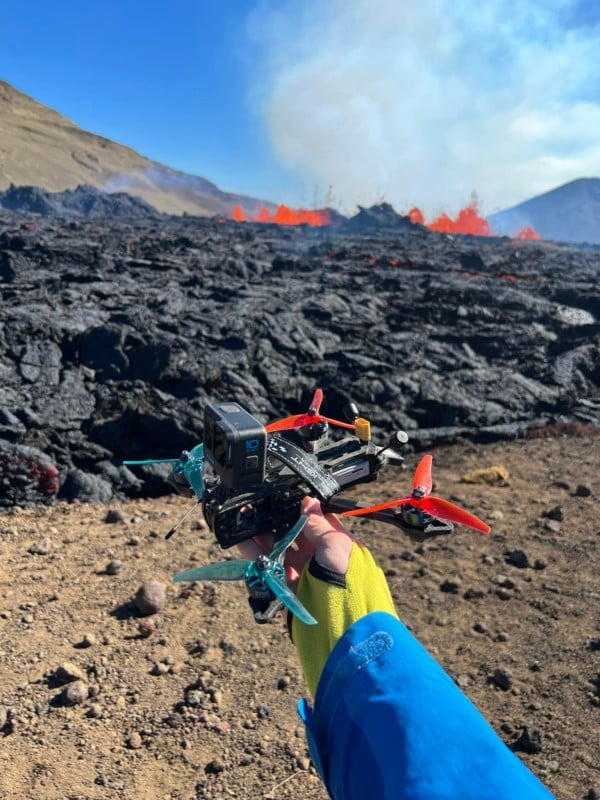 The volcanos, that erupted on Wednesday, are situated close to the country’s capital Reykjavik.

“Lava is coming from a crack in the ground,” Einar Hjorleifsson, a natural hazard specialist at Iceland’s meteorological office, tells Bloomberg.

Fortunately, at present, no lives appeared to be endangered by the lava flow, according to Iceland’s Department of Civil Protection and Emergency Management.

The country’s main transportation hub, Keflavík Airport, was briefly alerted, as is standard procedure during eruptions. However, the facility didn’t cancel any flights and operations are continuing to run on schedule.

The recent Geldingadalir eruption occurred in the same region where a six-month eruption started in February 2021, near Grindavík, a fishing town of about 3,600 people, Bloomberg reports.

Image credits: All photos by Airstock.