A major shift in the U.S. app economy has just taken place. In the second quarter of this year, U.S. consumer spending in non-game mobile apps surpassed spending in mobile games for the first time in May 2022 and the trend continued in June. This drove the total revenue generated by non-game apps higher for the quarter, reaching about $3.4 billion on the U.S. App Store, compared with $3.3 billion spent on mobile games.

After the shift in May, 50.3% of the spending was coming from non-game apps by June 2022, according to new findings in a report from app intelligence firm Sensor Tower. By comparison, games had accounted for more than two-thirds of total spending on the U.S. App Store just five years ago.

This shift in the U.S. app market is the most significant finding in the new report and demonstrates how successfully Apple has managed to create a subscription economy that allows a broader range of apps to generate sizable revenues.

The new data also supports this, as it shows it’s not only the biggest players that are benefiting from subscription revenue growth. In Q2 2022, 400 apps generated more than $1 million in consumer spending on the U.S. App Store, which is eight times the total from the same quarter in 2016. In addition, 61 U.S. App Store non-game apps generated at least $10 million in U.S. consumer spending in Q2 2022 — that’s more than the number of non-game apps that had generated $1 million+ in revenue in Q2 2016. 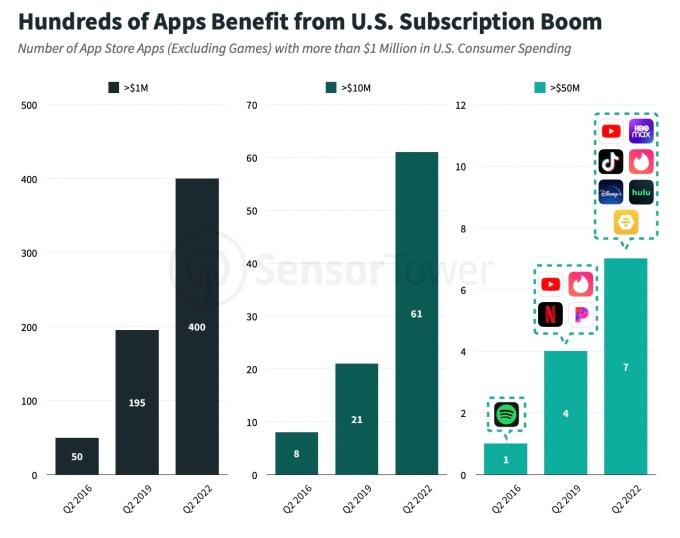 Subscriptions are the major revenue growth driver here, as non-game apps grew at nearly twice the rate  — at a 40% compound annual growth rate — since June 2014 compared with less than 20% for games, the report found.

The trend is a significant reversal of what mobile app spending looked like just a few years ago.

In 2019 and early 2020, for instance, mobile game spending growth was consistently higher than non-game spending. Game spending then surged again at the start of the Covid-19 pandemic. But by late 2020, non-game growth had caught up and the gap widened in 2021. 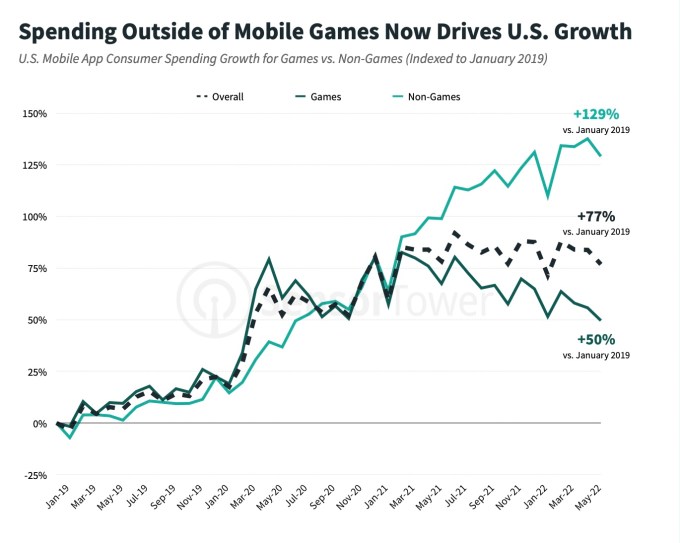 While non-games are enjoying their new dominance, it’s not all great news for the app economy in this most recent quarter. The report also found that U.S. app spending overall declined for the first time in Q2, following the wind-down from the spike generated by the pandemic.

At the start of the pandemic (around April 2020), year-over-year growth in consumer spending had jumped from around 20-30% in 2019 to 35-55% over the next 12 months. But in May 2022, U.S spending declined for the first time as consumers began to shift their dollars back to other non-mobile activities like restaurant dining and travel.

In other key findings from the quarter, summer travel drove travel apps to record high downloads in the U.S. and U.K., and airline app downloads in these markets were up 30%+ compared with Q2 2019, before the pandemic.

Meanwhile, the top five ticketing apps saw 10 million downloads, up 70%+ from Q2 2019 as consumers returned to concerts, sports games, and other events. 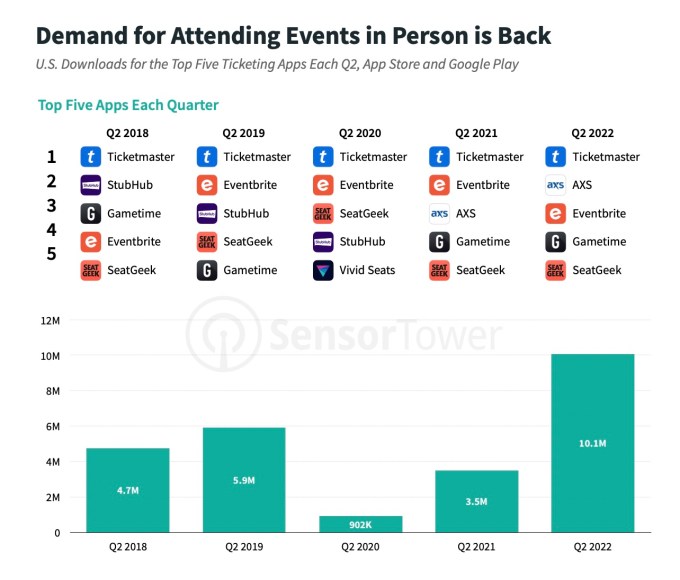 The most downloaded non-game app worldwide was TikTok, which has held the top position 8 times out of the past 10 quarters. It was followed by Instagram, Facebook, WhatsApp, and Snapchat. TikTok (including Douyin in China on iOS) had 187 million downloads in the quarter.

The top mobile game globally was Subway Surfers, with over 80 million downloads — its highest total since 2014, and following the game’s maker Sybo acquisition by gaming giant Miniclip in June 2022. The number two title was Garena Free Fire with 70 million installs for the third quarter in a row.

China was still the larger contributor to iOS gaming revenue, despite a pause on game approvals in May 2022. In Q2, 65% of consumer spending on China’s App Store was on mobile games, while 35% was on non-game apps in Q2 2022 — percentages that remained unchanged from a year ago in June 2021. Japan’s App Store still generates the third-most gaming revenue on iOS and it maintained this position, though games’ share shrank a bit to 68% of the total spend, down from 70% in June 2021.