What is EXIF Data in Digital Photos?

In the digital age, there’s a lot more to a photograph than the image itself. When most digital cameras capture an image, they record certain parameters and write them in the image’s file for later use. These parameters are called metadata and are stored as Exchangeable Image File data, or EXIF for short.

EXIF is useful, but can also have negative impacts in certain cases. This guide will teach you about EXIF, its advantages and disadvantages, and how to use it in photography.

Note: Although metadata is stored as EXIF, the two terms are often used interchangeably.

It’s important to understand that EXIF is much more than just the shutter speed, aperture, and ISO of your image. While you might use those the most when looking at EXIF data, EXIF encompasses much more. Here is a list of common parameters that EXIF encompasses.

How to View EXIF Data

There are many ways to access and view EXIF, from websites to built-in tools that come with your computer. This may come in handy when trying to view your own EXIF, and could also be useful if you are trying to find EXIF in an image that is not yours.

Perhaps one of the easiest ways to view EXIF data is to upload your image(s) to a website. This has its advantages in being easy to find and operate. It can also take much longer and require more effort because you will need to upload your image(s) with an internet connection. This method is difficult to use with a batch of images, so it’s best if you’re only looking for the EXIF of
a small number of images. Some websites may give you more data than built-in tools in your computer, such as adjustments in post-production.

Here are a few websites that you may find useful in viewing EXIF data:

Perhaps one of the most organized and useful ways to view metadata is via Adobe Lightroom’s metadata tool. To access it, click the Library module > Library Filter: Metadata. 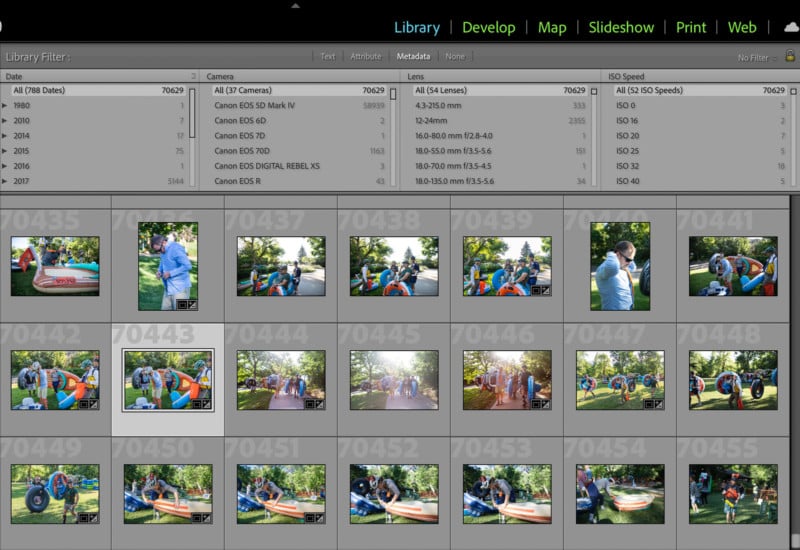 This will allow you to search your catalog by metadata, and you can add or remove parameters as you choose. This will give you a quick glance at different parameters and their images, and it will help you search your entire catalog if you’re looking for something specific regarding metadata. 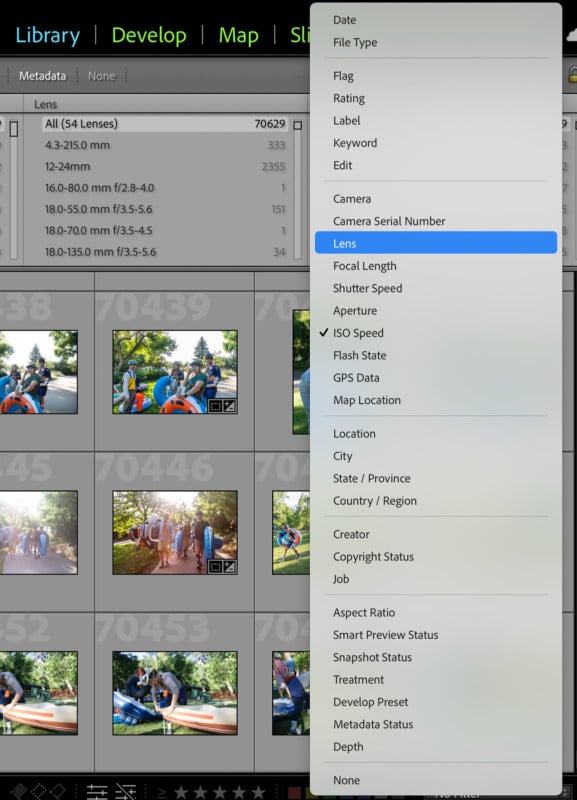 Built-in EXIF Viewer on a Mac

To view an image’s metadata on Mac, simply open it in Preview, which is usually the default application to display images. From here, click Tools > Show Inspector (or Command + I) and click the “EXIF” tab at the top of the Inspector. 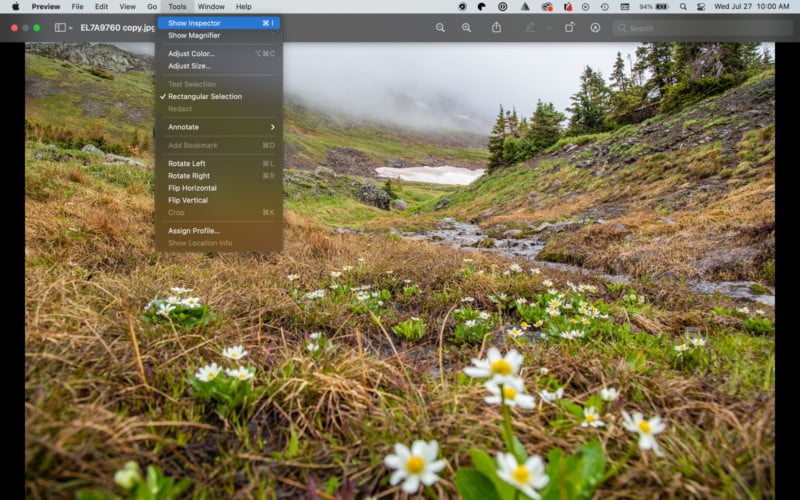 This won’t give you as much data as some of the websites listed above, but it will give you the most commonly used EXIF parameters. 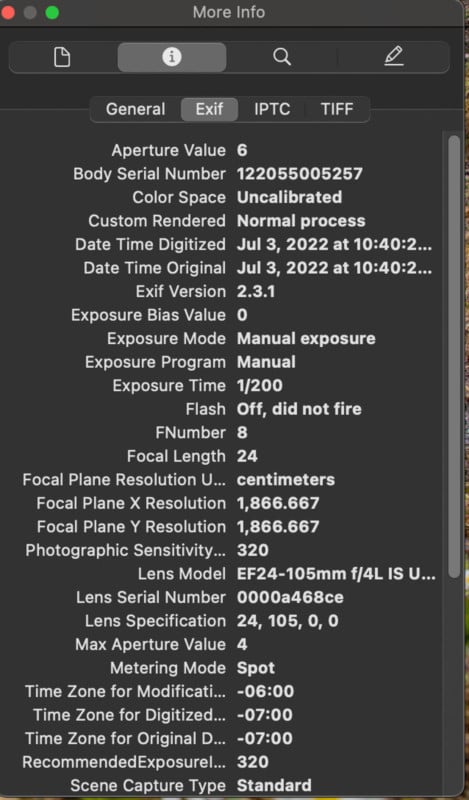 If you’re looking to just quickly glance at a few parameters such as shutter speed, focal length, aperture, and resolution, you can right-click on an image in its folder and press “Get Info.” 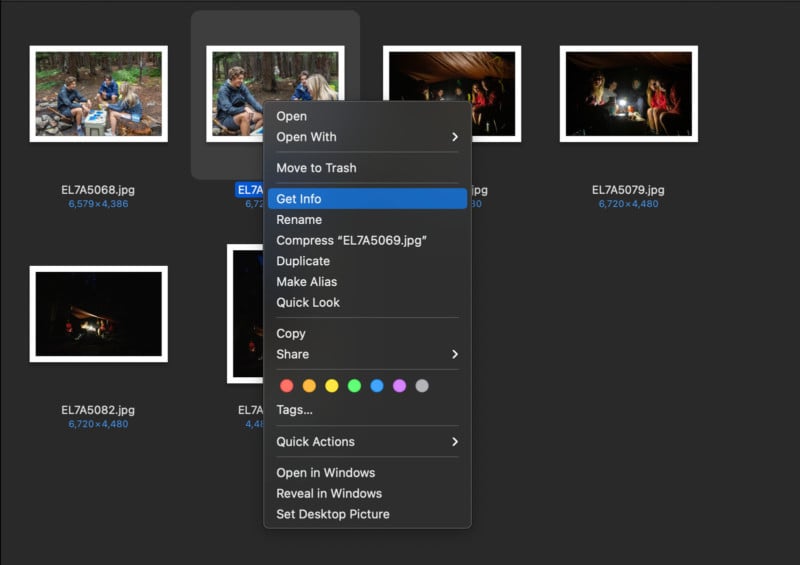 This will give you a quick glance at parameters you may be looking for, and can easily be done with a batch of images if they are all selected.

To view an image’s metadata on Windows, right click the image in its folder and select “Properties.” 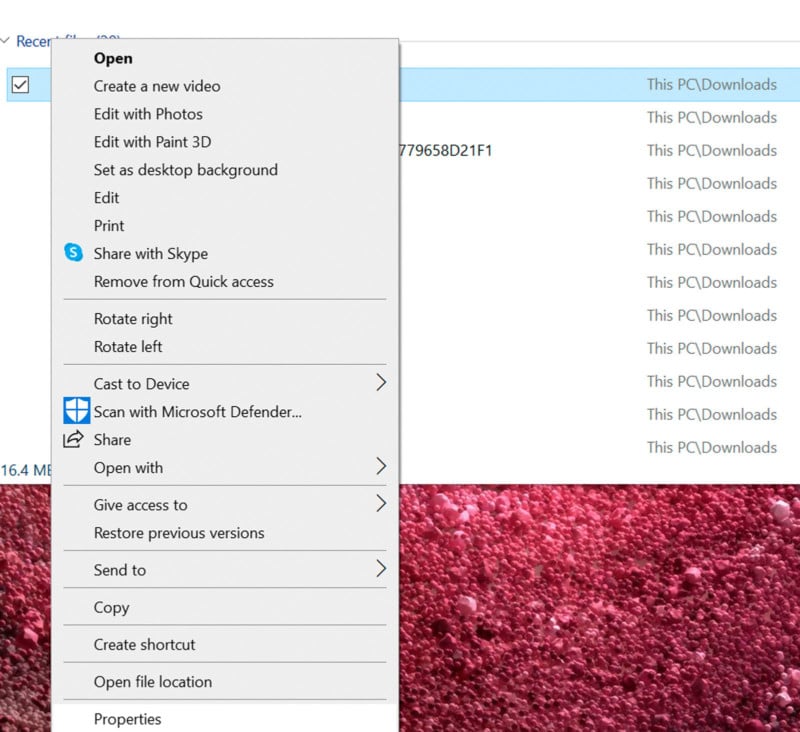 Click the “Details” tab and EXIF data will be listed. You’ll also see an option to edit and remove EXIF, which is discussed later in this article. 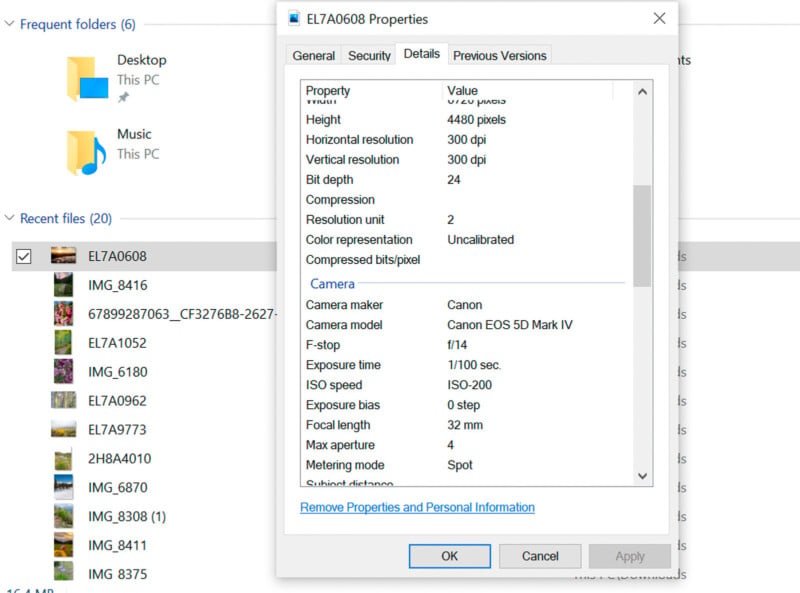 Advantages and Disadvantages of EXIF Data

In a world where EXIF is often shared over social media, there has been discussion about certain ethics and practices of publicizing the settings you used in a photo, your location, and other parameters. Here are a few pros and cons of sharing and using EXIF data.

1. Teaching and Learning. EXIF is a great teaching and learning tool. If you want to learn the right balance between shutter speed, aperture, and ISO in certain scenarios, find photographers who share their EXIF data and try to replicate their tactics. Of course, it would be even better to learn how to adjust your settings in an adaptive way, so see the corresponding con below.

Tip: Study EXIF by going through data and asking yourself if you can figure out why a certain parameter is the way it is. This will help you understand the “why” behind certain metadata, and allow you to better understand why you might change a parameter in the field.

2. Organizing Post-Production. EXIF can help you stay organized in post-production. Maybe you have a bunch of shots at high ISO and you want to run a batch denoise algorithm on those images. Knowing how to read their metadata is important for knowing which images you might want to process. Use Adobe Lightroom’s metadata search feature to search through your entire catalog for certain parameters.

3. Consistency Between Photos. If you need to stay consistent, (i.e. you are doing headshots for a company that hires new people throughout the year and wants similar photos for all of them), you can refer to your own EXIF to try to stay as consistent as possible. If you’re outdoors, environmental factors can influence your consistency, but the image should be somewhat similar if you are in the ballpark.

4. Crime Evidence. EXIF has been extremely useful in crime investigation, especially with the advancement of GPS technology. Photos shared and sent with location metadata stored in EXIF files have helped determine the whereabouts of people involved in criminal activity. Even simpler than GPS are the date and time of when images were taken, which are recorded in EXIF and can also be used as evidence.

1. Straight Copying Isn’t Useful. Simply copying someone’s settings won’t be useful on a shoot where you need to adapt, such as a portrait shoot, adventure shoot, and most types of commercial photography. Using jazz musicians as an analogy, they are generally respected for their ability to improvise and use what they know about music to make new, equally good, or better ideas. Sure, they would sound great if they played a complex solo exactly the same as someone else, but that isn’t useful in many scenarios and leaves no room for creative interpretation. Instead of copying someone’s EXIF, learn how EXIF combines to make a great image, and use that to your advantage.

2. Lack of Originality. With the point above, originality can be compromised if other photographers are using your exact metadata to produce an image like yours.

3. Privacy Issues. Certain parameters, especially those involving location, can have privacy-related impacts on people and the environment. Hard-to-reach locations that have been recorded in EXIF have been “discovered” and ruined by erosion, littering, and other detrimental human impacts. On social media apps especially, there are security concerns regarding sharing images with a specific location, since many smartphones record GPS coordinates in their EXIF and apps will provide an option to share that.

4. Inconsistent Standards. EXIF standards are not necessarily maintained and kept up to date. This can make for confusing, unnecessary, and counterintuitive data.

How to Remove EXIF Data From Your Photos

EXIF can be an invasion of privacy in a couple of different ways. Luckily, there are lots of methods to remove EXIF from your photos, selectively and entirely.

Removing EXIF from Photos on Mac

Mac OS doesn’t have a built-in EXIF remover, but it will allow you to remove the location from an image easily. Simply open your image in Preview, open the Inspector (Command + I), click the “GPS” tab and select “Remove Location Info” at the bottom. 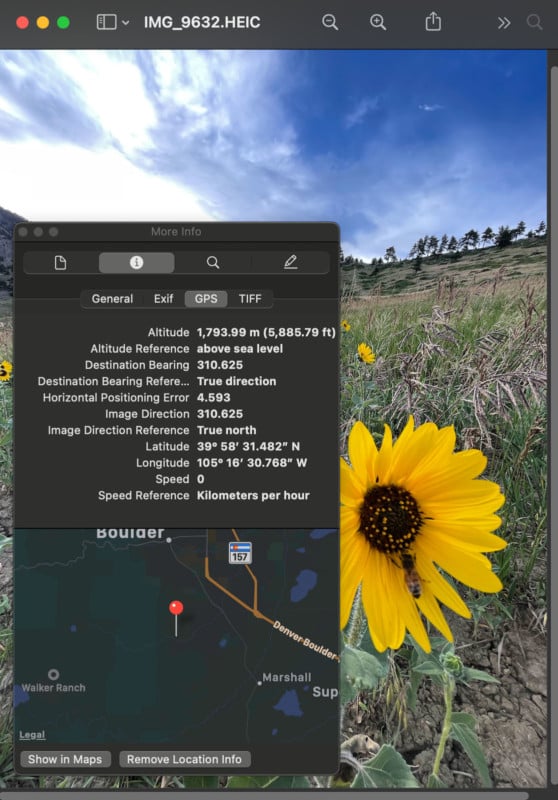 If you want to remove all of the metadata, ImageOptim is a free, easy-to-use program that will strip an image of all of its metadata in seconds. Be aware that this is irreversible, so if you want a copy of the metadata somewhere, it’s best to make two copies of the image and only strip one. 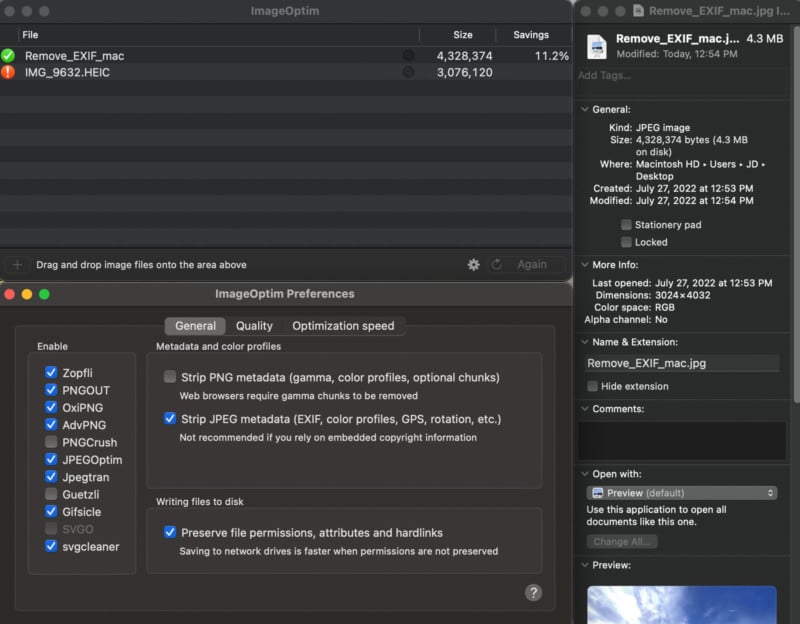 At this time, it doesn’t appear that ImageOptim supports Apple .HEIC compression, so you will have to convert photos to .JPG or .PNG. There are various settings that you can change, but make sure to do it before dragging and dropping images into the software.

Removing EXIF from Photos on Windows

Windows has a built-in EXIF remover and will let you selectively remove EXIF from an image. Right click the image, select “Properties” and then click the “Details” tab. You’ll see a button that says “Remove Properties and Personal Information,” which will allow you to selectively remove parameters from the image’s EXIF. You can also simply create a copy with all possible properties removed. 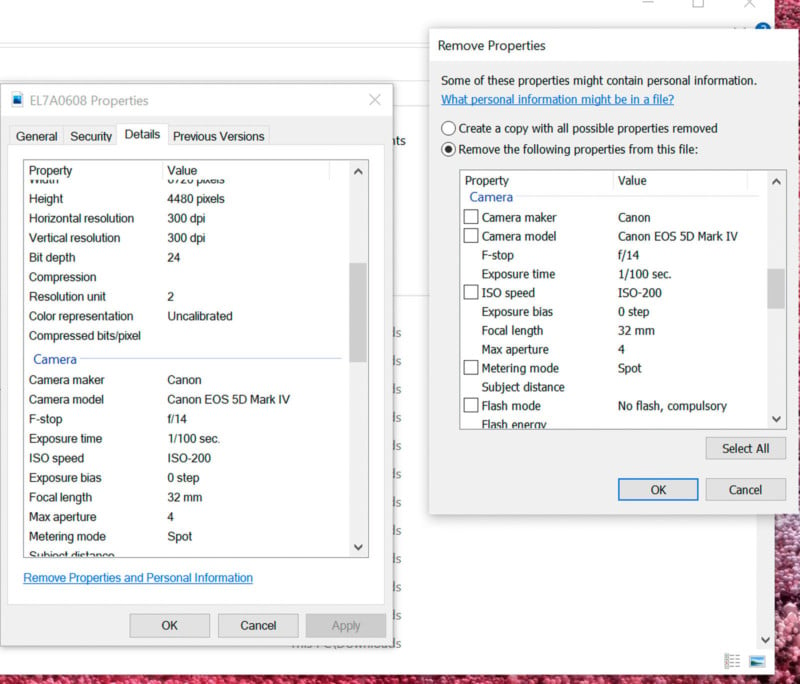 Removing EXIF from Photos on iOS and Android

First of all, it’s possible to disable geotagging (saving GPS data to your photo) in Settings or your Camera app. If you’d still like geotagging but want to remove the location from a specific photo on iOS, simply go into the Photos app, swipe up, and select “Adjust” under the map.

From here, you are able to change or remove the location.

Both iOS and Android have apps to completely remove metadata from photos. Check out Exif Metadata for iOS and Photo Metadata Remover for Android as two free options.

EXIF is the file that stores certain parameters of an image called metadata. You can use it to your advantage as a photographer by learning from your own and other metadata, and it can also be harmful in terms of security and privacy.

Understanding EXIF is important in becoming a better photographer so that you can take advantage of its pros and be aware of its cons.

Gmail gets a new look, Instagram trips while trying to be TikTok and India blocks Battleground Mobile – TechCrunch